A Rainy Day with the Dreaded Minutemen 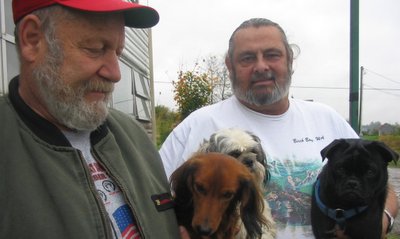 Well, we live in a trailer at the edge of town. You never see us, because we don’t come around. We’ve got 25 rifles, just to keep the population down.- Neil Young, `Revolution Blues’.

Two old guys in a little travel-trailer with a leaky roof, drinking coffee, content with one another’s company and the affections of three little dogs – a shihtsu, a miniature daschhund, and a pug. No Confederate flags. No Ak-47s. No Christian Patriot mugs. Not even any beer.

That’s what you find if you go looking for the command centre of the Washington State Minutemen. It’s a trailer in a field just a short drive south of the Canada-U.S. border at Blaine, a white guy who’s not quite as quick on his feet as he once was, and a Metis, originally from St. Boniface, Manitoba. They sit in the trailer and chat by walkie-talkie with about a dozen grandparents parked in cars and campers at a series of roadside spots along the border between Blaine and Sumas.

If you subscribe to a Fox News version of the world, you might be surprised to find no well-formed battalions of disciplined young patriots patrolling the rolling hills and woods of Whatcom County, protecting America’s porous northern borders against the threat of terrorists from British Columbia who are making plans to slip into the United States and blow stuff up, as any fool knows.

Similarly, in the “No One Is Illegal!” conception of reality, you can well imagine that if you drive down that same quiet country road a few minutes from the 266 exit off the I-5, you’ll soon find yourself surrounded by a private army of half-witted right-wing vigilantes, white supremacists and dangerous, heavily-armed hate-mongers whose self-appointed mission along the border is a cover for their real agenda, which is to inflict violence and suffering upon people of colour.

The problem is that in the real world, all you’ll find is a couple of old guys in a trailer, or maybe not, because they might be out making the rounds of their fellow Minutemen volunteers, parked on backroads along the border between Blaine and Sumas. The volunteers get lonely. They run out of coffee. They get nervous. The other day, a U.S. Border Patrol officer popped by a Minuteman post to say that five people were hiding in some bushes on the Canadian side, apparently intending to make dash across the line, so the volunteers should keep their eyes peeled. It was hugely exciting. But nothing came of it.

Some of the volunteers persist in the exotic American custom of lawfully possessing handguns, but mainly they’re armed with binoculars. They keep an eye out for pot smugglers headed south, or gun smugglers headed north, and if they see something odd they call the Border Patrol. If it turns out that their vigilance results in the apprehension of some whackjob from the Army of Mohammed, then hey, righteous. High fives.

. . . But I’m still not happy, I feel like there’s something wrong. I got the revolution blues. I see bloody fountains, and ten million dune buggies, comin’ down the mountains.

Well, I’m sorry for you, but I’m afraid that’s all there is. Besides, I suffer from a condition of my own. I’m Canadian, I’m some kind of socialist, and I confess to an affection for Yanks that is usually tempered by the degree to which I can be confident that they’re safely at home and seeing to their own affairs. It’s a bit like that same Neil Young song:So you be good to me and I’ll be good to you, And in this land of conditions I’m not above suspicion. I won’t attack you, but I won’t back you.

It was in this frame of mind that I spent a rainy afternoon the other day wth those two guys in the trailer with the leaky roof.

The white guy was Tom Williams. He’s the 64-year-old State Leader of the Washington Minuteman Detachment. Born in San Diego. Lives in Deming, a little town nearby on the Nooksack River. Williams served in Vietnam with the U.S. Marines. He’d learned Spanish from his buddies in high school, so he got a Marines’ job as a linguist. Then he got a psychology degree, did duty evaluating comissioned-officer candidates, and later specialized in post-traumatic distress disorder. Took up a civilian career as a trauma counselor, a position on the board of directors of the International Society of Traumatic Stress Studies, spent some time with the National Organization of Victims Assistance, and ended up incapacitated by the suffering of his own clients. It was the kids, mainly. They get to you.

The Metis guy was Claude LeBas. He’s Williams’ right-hand man, the Minutemen “intel officer” whose job requires a familiarity with the operation of walkie-talkies and cellphones and other such paramilitary know-how. Barrel-chested. Ponytail. At 60, he’s the youngest of the Washington Minutemen regulars. LeBas was in in Vietnam in the early 1960s, a Canadian soldier in a small international contingent that was engaged in the “police action” that rapidly became a full-scale American war. When Canada pulled out, LeBas stayed, became an American citizen, joined the Marines, and in his later civilian life he worked as a field officer with the U.S. Customs, then took early retirement after suffering a stroke and undergoing a triple bypass heart operation. Ask him how he ended up in the Minutemen and you get a sheepish smile. Williams answered for him: “Actually, Claude wasn’t going to do it until he knew I was going to for sure, and, well, he knows I can’t take care of myself so good, so. . . .”

Here’s Williams on being right-wing: “I don’t even listen to Rush Limbaugh.” On being a vigilante: “We don’t take the law into our own hands anymore than you do when you report a drunk driver.” On leading a militia: “You figure you’d have to be armed or something to be a militia, right?” On being a racist: “I’m not a racist.” He’d stopped smiling. “Racism pisses me off.” He was quiet, and then: “It increases my heart rate when I think about that.”

Williams has a thing about wildflowers. That’s how he got tangled up with the Minutemen. He was down in Arizona looking at flowers, and he met some former marines who’d gone to join up with the Minutemen there. They’d just started their ridiculously controversial citizen-patrol operations to protest the ongoing consequences of the Bush administration’s underfunding of border security: More than a million people sneak into the United States across the Mexican border every year. After Williams satisfied himself that the Minutemen weren’t just a bunch of gun nuts, he reckoned “it would be fun to ride around the desert in a nice jeep,” and one thing led to another.

But there are nightmares involved in all of this.

That otherwise reasonable Americans will end up doing Block Parent duty with fieldglasses in the woods along Washington state’s border with British Columbia can be explained at least partly by the visions that have been haunting them in recent years.

They tune into Seattle’s KIRO 7 television news and “investigative reporter” Chris Halsne tells them that Hezbollah and Hamas and al Qaida and 52 other terrorist groups and “hundreds of seasoned terrorists” are busy in British Columbia with plans to use Canada as a “launching pad” to swarm into the United States and slaughter innocent Americans. Halsne has reported that al Qaida is selling drugs in the streets of Vancouver. He has reported that some of these terrorists have already slipped into America because Washington’s ill-defended border is “an open gate.”

These same reasonable people sitting in the front seats of their pickup trucks at the dead-ends of roads branching off “H” Road between Sumas and Blaine can read in their newspapers that their president promised 2,000 new border-guard positions after 9-11, but managed to scare up the cash for only 400 or so.

Behind Bellingham City Council’s panicky resolutions admonishing the Minutemen, there are even more nightmares. Long before 9-11, Washington state had already endured fright-making encounters with heavily-armed survivalists and backwoods neo-fascists. It should come as no surprise that Bellingham is not immune to the intellectual and political paralysis so many Americans seem to suffer whenever they find themselves in situations where terms like “race” and “national security” are being freely tossed around. Some people hear “Minutemen,” and right away they see “Branch Davidians,” and a compound in Waco, in flames. It’s the way things work.

But if you want to make more elaborate sense of all this, go ahead and consult the Northeastern Federation of Anarchist Communists if you want. On their way out to pick fights with the Minutemen in Vermont, they might stop long enough to explain to you that national borders are really just a form of racism. And Vancouver’s anti-Minutemen “No One Is Illegal!” protesters will tell you the same thing. They’re against the very existence of the Canada-U.S. border. They say the only reason it’s there is to allow the white race to assert its illegitimate claim of entitlement to North America.

With all the fantasist gibberish infecting the discourse about race and borders, it’s no wonder that there’s a threat of White Power sociopaths being drawn into the discussion. That’s another thing that worries Tom Williams and Claude LeBas.

To his credit, Williams isn’t afraid to be candid about how the Minutemen enterprise got so bent out of shape, so fast: “It’s race. Race has been coupled with border protection, and then suddenly you’ve got people who don’t want our borders protected, and it goes crazy.”

The news media feed the pathology, and round it goes.

Marc Cooper, of the Nation and the L.A. Weekly, has found a similar disparity between what happens in the real world and the media’s account of the Minutemen on the Mexican border. He points a way out: “Now more than ever, the public needs news media that are serious, thoughtful and analytical, not compliant suckers for the wound-up partisans and pandering politicians who are increasingly likely to inflame or obfuscate the issue with goofball dog-and-pony shows.”

If that’s too hard for you to get your head around, then go right ahead, wet your pants, set your hair on fire, and join the chorus. Here’s your song sheet:

I hear that Laurel Canyon is full of famous stars. Well, I hate them worse than lepers, and I’ll kill them in their cars.

——–
Marc Cooper’s reports on the Minutemen can be found

here (the headline advising the Minutemen to “march north” was just an unfortunate coincidence of sorts) and here, and Marc’s excellent web log is here. My Georgia Straight column on the subject (which is also topped with a strangely funny headline) is here. For amusement, KIRO 7’s contribution to the declining standard of “investigative journalism” in the matter of terrorism can be found here. Neil Young, a great Canadian and one of my heroes, has been on temporary loan to the United States for some while now. His homepage is here, and the lyrics to that great tune `Revolution Blues’ are here.